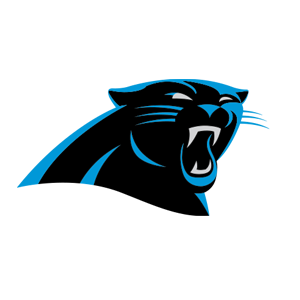 The Carolina Panthers promote responsible drinking and positive fan behavior at Bank of America Stadium. The Panthers alcohol management plan ensures that fans have a safe and fun experience.

None of the organizations that operate Bank of America Stadium use TEAM for alcohol management training. 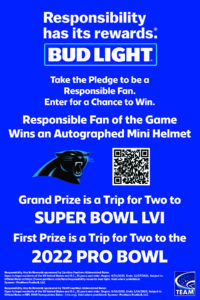 Every game day, Bud Light and the Panthers believe that fans should make responsible decisions. That’s why we reward fans with Bud Lights’ annual Responsibility Has Its Rewards program. Simply fill out the form each week and enter for a chance to win a Panthers mini-helmet.

To promote a high-energy environment to lend support to our team, while maintaining a wholesome, family-oriented atmosphere by defining certain acts or types of behavior that are unacceptable.

This policy applies to all employees of the Carolina Panthers, their sub-contractors, stadium visitors and ticketed patrons.

To ensure that all patrons have a pleasant game-day experience, each patron should act responsibly and be considerate of others. Ticket holders should also be sensitive to the behavior of their guests. Rules of conduct are printed on the back of each ticket.

The following acts or types of behavior will not be tolerated in Bank of America Stadium (List is not all inclusive):

Behavior that is unruly, disruptive, or illegal in nature.

Possessing and/or concealing a firearm, explosives or other weapons (weapons carried with permits are also prohibited).

Fighting, taunting or any action that may harm or endanger others.

Projecting images onto players, coaches, officials, broadcast or network employees or other sideline personnel by aiming a laser pointer, spotlight or other such device at them.

Intoxication or other signs of alcohol and drug impairment that result in irresponsible behavior (Intoxicated patrons will not be admitted to the stadium).

Offensive language or obscene gestures, to include the use of such language or gestures concerning a person’s race, ethnicity, color, gender, religion, creed, disability, age, sexual orientation, gender identify/expression or national origin; or to instigate, incite or encourage a confrontation or physical assault.

Failure to comply with new stadium policies, including those policies requiring face coverings and requirements to maintain physical distancing.

Nudity – to include the removal of shirts, blouses and other items of apparel that may offend others.

Selling tickets or other merchandise on stadium property.

Unreasonably obstructing the view of other patrons.

Interference with the progress of the game (including throwing objects on the field).

Any other acts or behavior that in the judgment of stadium management poses a threat to other patrons or diminishes their enjoyment of the game.

Whether or not certain types of behavior and/or acts are inappropriate or offensive to others may depend on one’s perspective and values. Stadium management reserves the right to deem an act or exhibited behavior to be inappropriate and act accordingly.

Fans in need of assistance should contact a member of the stadium staff or text a message to security at 704-Get-Help (704-438-4357). Stadium security personnel will respond to complaints of misconduct.

Patrons who fail to comply with stadium policies are subject to a warning, ejection or arrest. Acts such as fighting, being abusive to others, being intoxicated, throwing objects or committing other acts that may injure other patrons or disrupt the progress of the game may result in ejection and/or arrest without prior warning. Violations by Permanent Seat License holders or their guests may result in the revocation of the Permanent Seat License and ticket privileges.